Because we don’t know what soup is, and neither do you!

SOMETHING SOMETHING SOUP SOMETHING could be defined as a videogame. We prefer to think of it as an interactive thought experiment: a piece of technology that discloses situations and presents notions in ways that are interactive and negotiable (and maybe even playful).

SOMETHING SOMETHING SOUP SOMETHING it is designed to reveal, through its gameplay, that even a familiar, ordinary concept like ‘soup’ is vague, shifting, and impossible to define exhaustively. 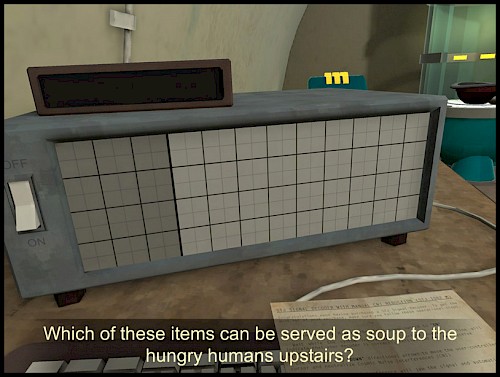 SOMETHING SOMETHING SOUP SOMETHING is also designed to stimulate reflection on the possibility to analytically define what a game is.

Our ‘interactive thought experiment’ involves some narrative, it allows for a bit of exploration, it features a section that quantifies the performance of the ‘players’ in relation to a pre-established goal... But does the presence of those ‘ludological ingredients’ warrant its definition as a video game? What if only a part of it could be formally recognized as a video game? Is it even wise or productive to strive for a complete theoretical understanding of concepts like ‘soup’ or ‘game’? 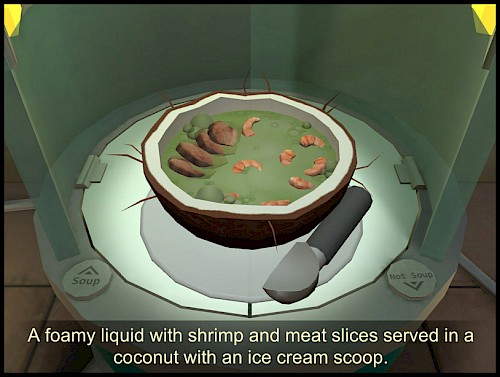 At this point, some of you might be wondering what is the point of explaining the meaning of an interactive experience. Should not a well-designed ‘video game’ be a self-standing piece of work? Is it not a failure on the designers’ part to publish text in order to clarify what they mean?

Well, we do not give a hoot about what a well-designed video game should be or should do. What we care about is that SOMETHING SOMETHING SOUP SOMETHING can be tackled and interpreted by anyone with an internet connection and a basic familiarity with computers. After all, we do not even know what a video game is. Do you?